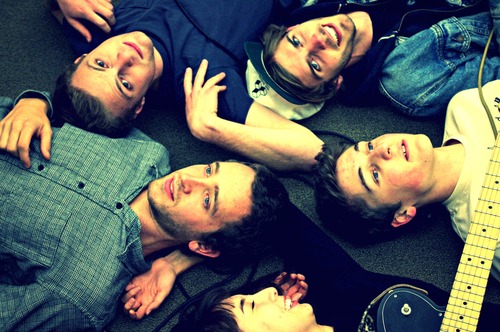 In Ampeater’s Words: Peaks never flaunts its colossal talent, but that talent is hard to overlook. The band embraces the indie aesthetic but goes about it via a classical approach. Each track is a masterpiece-pleasant to the ear and innovative to the intellect-full of compositional grace and orchestral balance.

“Transit” begins with a smooth vocal verse and a melodic guitar hook. While these sections alone could have alone made a complete and credible indie tune, Peaks gives us more than expected and digresses into a 6/8 jazz-waltz through which a saxophone and other unconventional textures provide a rich harmonic backdrop for the impromptu choir that emerges. After a well-timed climax, the track eases into a final verse, which soon crumbles as the drums somersault into a fireworks display of rolls and fills. In the midst of the chaos, the ensemble comes together in unison to deliver a final resolute rendition of the main theme.

Remarkably, throughout the stark metamorphosis, the music never ceases to be subtle. Unexpected twists that would seem contrived in the hands of amateurs are executed with such nonchalant precision that the daredevil compositional risks undertaken don’t distract. In short, Peaks is no less than the realization of indie as an artform.

In The Artist’s Words:

“Transit is simultaneously simple and strange. It sports a sugary melody and a poppy groove, but has a strange form, with a wordless chorus, a far away waltz for a bridge, and a free-jazz clatter of a finale. Rachel says it tracks a romance turned long distance, from a train-ride away relationship to a plane-ride away one, but it reminds the rest of us of the late, snowy night in Massachusetts when we recorded it. It is a rumbling, restless journey, disguised as a pop song, or perhaps the opposite.”