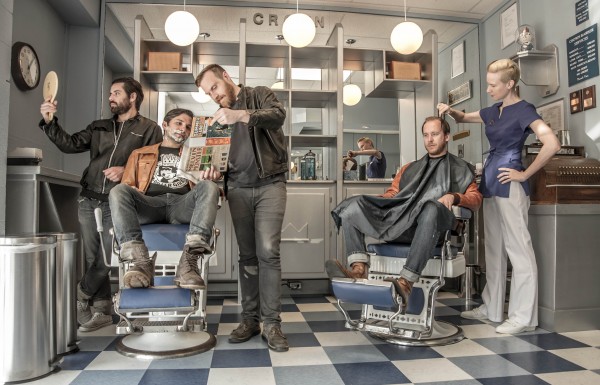 In Ampeater’s words: I liked Legato Vipers from the first listen, but didn’t know what to make of the band’s psychadellic cinematic surf-rock antics. The music was quirky, groovy, and, without a doubt, over the top. But were these dudes for real, or was it all an elaborate and well executed joke? I’ve come to the conclusion that its a little of both.

I was in a lot of bands in high-school-more than I can count on two hands. These bands spanned an enormous range of styles but involved the same general cast of characters, despite abrupt shifts in image and wardrobe. One week it would be death metal, the next, gospel pop, nautical ballads, etc. We were too aware of the cliches to make serious bands so, we called them fake bands. Semantics, perhaps, but these fake bands gave us the freedom to be extreme, to be absurd, to have fun. In the end, these fake bands became a lot more real than the serious ones. I’ve spoken to several friends since then and discovered that a large number of serious musicians have turned to joke bands as creative outlets.

But Legato Vipers is much more than a joke band, although it does seem to stem from the same philosophy. With superlative musicianship and top-notch production, the band has elevated an absurd concept into something legitimate. Perhaps a better metaphor would be performance art. Legato Vipers, like most theater, cannot be appreciated without considerable suspension of disbelief. After all, it’s surf-rock… in 2013… from Canada. But the band makes this leap of faith so convincingly that it’s hard not to follow. From the mysterious and spacy tremolo guitar to the propulsive drum and bass, everything is spot-on. It’s said that the best actors don’t have to act-from the moment they take the stage, they become their characters. When I watch Legato Vipers rock out in an empty stadium in the center of a swarm of roller-skaters, that’s the impression I get. Each member plays his role with precision and a passion that seems too much to fake. Perhaps they’re having a laugh, but they’re also having a blast, and I suspect that they believe 100% in what they’re doing. We should too. Tune in and enjoy the show.

In the artist’s words: Common Grackle was the beginning of Legato Vipers. When “The Great Repression” took a booze-fueled, bastardized-surf turn for the worse at Camp Pepper, something happened in the mind of Belluz that can only be described as inspired stupidity. Brooks had indeed learned to do reverb-soaked tremolos!

Their take on the genre made an appearance on Del Bel’s “Oneiric.” Better or worse, this thing was gathering steam…

But it was in a remote barn on Bruce Peninsula that Jameson’s was chased with warm beer; the “Chocolate Milk” aftertaste was coined. A theme song followed. So did three Belluz shit-surf originals for an as-yet nameless band.

Pyle agreed to rerecord an EP. Howard, Johnson and Anderson too were added. Brooks wrote four more tracks– fit for a funeral home. The band met in one to play and track their first-ever note. “Legato Vipers” were christened.