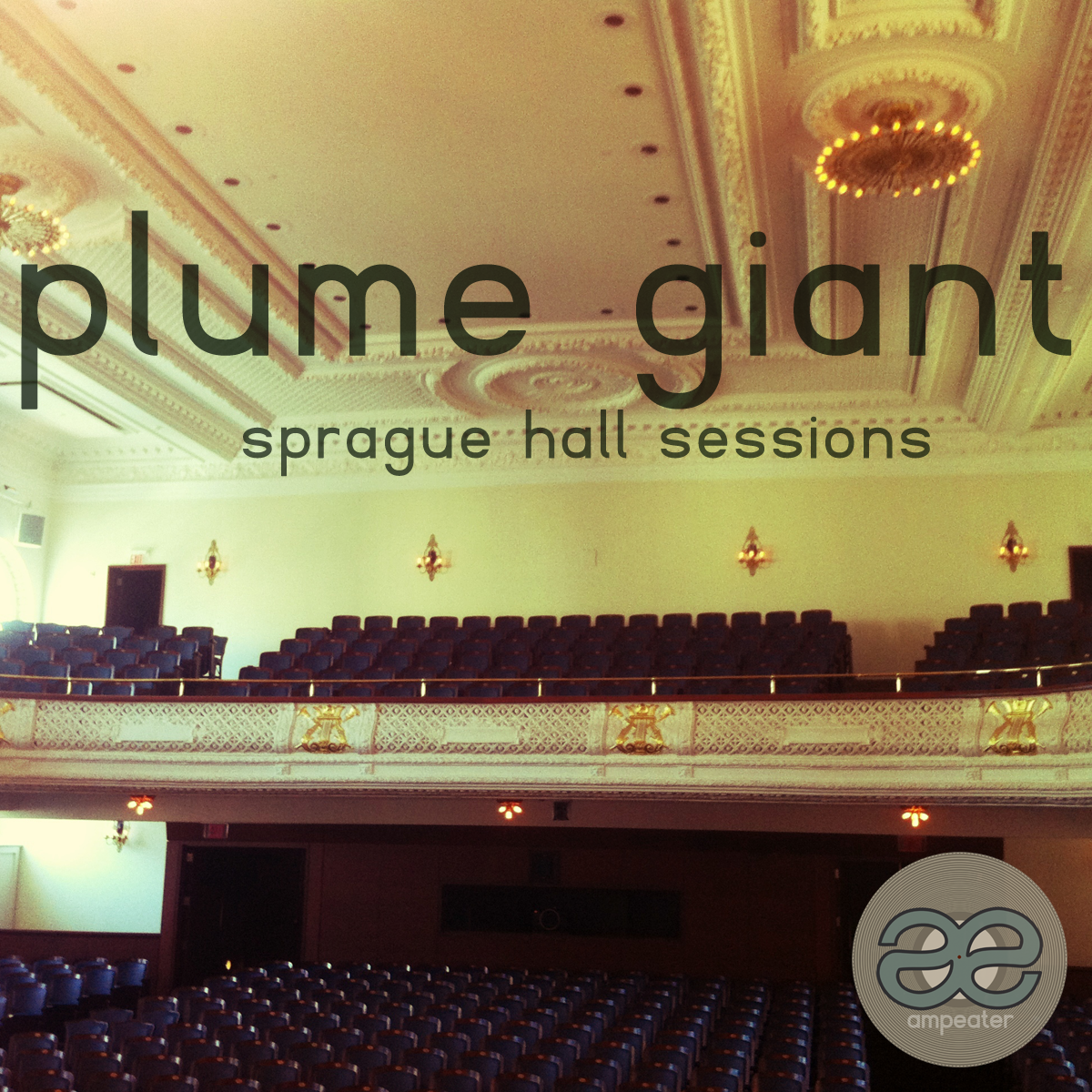 In late March of this year, Nolan Green invited me to hear his band Plume Giant perform a short set of songs at Sprague Hall in New Haven, CT. A spacious, architecturally beautiful, and acoustically rich recital space, Sprague typically hosts concerts by Yale School of Music students and faculty, as well as all manner of visiting classical and jazz artists. Bass great Ron Carter played there a few days before our session. The week after, the St. Louis String Quartet performed a selection of quartets by Mozart and John Adams. It is, in other words, not the exactly the kind of place you’d expect to go see your friend’s band cut a handful of tracks. And yet, listening to the results, Sprague’s lofty pedigree proves an unexpectedly keen match to Plume Giant’s elegant, haunting, and immaculately executed songs. The recording is crystal clear, and I’d say less than half of that has to do with the Hall’s legendary sonics. From the intricately woven harmonies of “Kensico Dam,” to the coy insistence of Dan Hick’s staple “Old Timey Baby,” the trio of singer/guitarist Green, guitarist/fiddler/singer Oliver Hall, and fiddler/vocalist Eliza Bagg make music whose referents range from the raucous idioms of American folk, to the restraint and subtlety of a chamber ensemble, to the grit and humor of a touring bar band. Surprises are abundant in these recordings, but the ever-shifting structures, the complex interplay of the three voices, the endlessly inventive variations of recurring themes never seem manipulative or academic. Rather, Plume Giant performs with an honesty that makes no apologies about its talent, its willingness to go to harmonic and compositional places few other bands would even attempt, let alone pull off. In the interview below, Bagg discusses how the trio tries to create “a specific world” for each song they write and perform. Like any world worth visiting, Plume Giant’s tracks ask the listener to do a little exploring. For every standout hook, every beautiful stretch of a song, there exist hidden moments of weirdness, nooks and crannies that only come to the surface over repeated trips. When you leave, these places stick with you, like a bramble you find latched onto your sock after a long hike. Plume Giant took me on a journey that night at Sprague Hall. This session is what we brought back.

1. How did the band get together? Was there an evolutionary period before you became Plume Giant?

Nolan and Oliver were both involved with popular music things at Yale [University]. Nolan ran an organization called Yale Music Scene, and it hosted open mics at which both Oliver and Nolan played. Oliver even ended up hosting some of these in his dorm room. Nolan and Oliver liked each other’s stuff, so they started “making music” together. At first these “jam sessions” were fairly directionless, or perhaps too direction-full. We still joke about the early days when Oliver would play the electric bass with Nolan on mandolin, but there are a few songs from those days that are still around. Oliver and I met playing in a classical string quartet, and a few months after the boys formed Plume Giant, Oliver asked me to come sing on a few songs. After a few awkward performances during which I joined the boys for three or four songs on the set, we all decided that I should just join the band. There were a few key rehearsals that I remember, the three of us sitting together to come up with harmonies for “Old Joe” and “Wait it Out” , that really began to define our sound.

2. What do you think the most important aspects of Plume Giant are in terms of your sound, songwriting, and personnel.

For me, Plume Giant’s emphasis on collaboration is paramount. Collaboration is vital to our songwriting, as well as to our larger artistic vision. Suffice it to say we have a lot of discussion in Plume Giant. We discuss just about everything we do, and are constantly bringing in to the conversation ideas from other artists we’ve heard or seen, whether they’re musicians or other artists. We’re all about keeping the flow of ideas going, in terms of songwriting, instrumentation, harmony construction, and even just our general aesthetic. Secondly, collaboration is fundamental to the kind of music we make. Listening to each other while we’re performing is arguably the most important element of our performances, both for the sake of musicianship and intonation, and also for picking up on vibes and energy. I think we’re really tuned into each other at this point, and it’s so important that we work as a team in both the creative and performative components of our work.

3. Can you tell me a little about the new album you’re working on, and how it relates to your previous recordings?

While our new album continues to feature our voices–the focus is still definitely on the three of us singing together–we’ve made a huge effort to diversify our sound, or, as we like to think of it, to fully explore the widest realms and most varied elements of our sound. We’ve really tried to capture, or at least understand, the strange and different creature that is each song on the album, and this means trying to create a specific world for each song. Part of this comes from having performed so much. We already have strong associations and feelings attached to the live performances of many of the songs on the album, and we want to best recreate those feelings, or the kind of energy that accompanies the songs, in the recording of them. While this was certainly a goal of the EP, we’ve allowed ourselves to take more risks with this new album, and the songs have had longer to marinate. We’ve really given ourselves the time and space to explore the places that each song can go.

4. Who are some other musicians or bands that are touchstones for you guys?

We really listen to many different kinds of music, and, while a lot of it sounds almost nothing like us, I would say that we try to absorb ideas from all of it. Some groups that we listen to often, or take a lot from, are Dan Hicks and the Hot Licks, The Dirty Projectors, Radiohead, Bill Callahan, Paper Bird, Arcade Fire, Joni Mitchell, Grizzly Bear, The Beach Boys, Wilco, Tom Waits, and, of course, The Beatles.

5. What do you envision for the tour this summer?

We’re really excited for the summer tour. Aside from our time in Colorado, which was set up by our friend Macon in Paper Bird, the whole tour’s been self-booked. It’s been a ton of work but is allowing us to play with different local bands at each stop that we really dig. The back-and-forth with local bands–setting up the bill, confirming the venue, working on promo–gives us a feel for the music scene in each city and makes each stop its own little special event rather than just another hit and run bar show. First we have to graduate, but come May we’re hopeful that the tour will get folks all over the country excited about the record release later this summer.