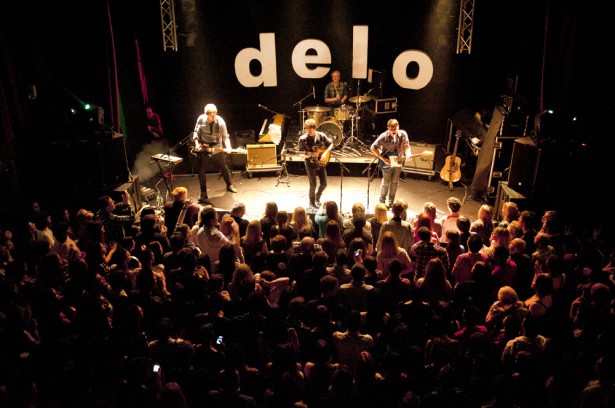 With followers worldwide and heaps of critical acclaim under its belt, Delorentos isn’t the undiscovered diamond-in-the-rough artist we often write up on Ampeater. Three of the band’s albums have reached Top-10 on the Irish Pop Charts. Delorentos has also been nominated for notable accolades like the Choice Music Prize and Meteor Awards. The attention is well deserved. Delorentos knows how to write immediate and memorable songs like the two tracks featured here. Little Sparks, the band’s latest album from which both featured tracks are drawn, will no-doubt appeal to the mainstream. Still, Delorentos hasn’t lost touch with its indie heritage and sold its soul. In fact, grassroots tactics continue to pave the band’s path into the spotlight. Independent artists around the world should take careful note of Delorentos, and for more reasons than the music alone. Delorentos demonstrates a viable formula for homemade success and presents hope for reconciliation between underground and main-stream aesthetics and approaches in the era of digital music.

A-Side “Bullet In A Gun” is the obvious breakthrough single on Little Sparks. Delorentos builds a spectacular anthem on a modest and overused chord progression through one of the catchiest melodies ever unleashed upon the human race. Ro’s intense performance creates seems all the more urgent and desperate because it is so exposed. Tension mounts throughout the verse and then explodes in the chorus. It’s not a matter of volume or complex orchestration, though. We can feel the power of the composition even in an unplugged arrangement like the one performed here. The video was shot on a narrow cobblestone street in historic Madrid. Delorentos had planned to perform a different track, but made an impromptu decision to switch when the audience requested a new track. “With an hour to go we hadn’t worked out a version,” explains Kieran. Without a formal arrangement, amplification, or proper instruments, the track still sounds huge. Vocal harmonies and raw percussion give it the needed lift. The track retains a deep a visceral rhythmic pulse that, whether present or just implied, propels it from start to finish. The contrast between the solo verse and collective chorus also emphasizes the lyrical shift from the individual to universal.

B-Side “Petardu” represents a more reflective side of Delorentos. The discrete catchiness hinges on ambiance, with lusher textures and smoother production. The vocals are gorgeous and retain a relaxed pace appropriate over the more energetic beat. As a whole, the track is introspective and bittersweet.

Delorentos released Little Sparks under its own label, Delorecords. To celebrate and promote the album, Delorentos put new spin on a traditional approach. The band visited cities and towns throughout the nation to make new friends and fans through intimate acoustic concerts in makeshift venues. Most of the record shops where such events would have been hosted in the past have closed down, so instead the band created its own flash Deloshops. “It was a great success, and we actually sold some CDs too!” jokes Kieran. “I think if you want to be in a band, and expect people to listen to your music, you need to write great music, play great shows and do interesting things!” The band also accompanied the release with a homemade magazine dedicated to some of their favorite artists throughout Ireland. From a band with such mass appeal, grassroots touches like these represent a sincere and admirable commitment to establishing a personal connection with an ever growing fanbase.

All members of Delorentos are singers and songwriters who share the role of frontman and contribute to the collective composition process. After almost a decade of experience together, the band seems to have discovered a comfortable and productive balance. Little Sparks retains the energetic optimism that marked the bands earlier work but with a more mature polish and artistic vision.

Delorentos has begun to make the leap across the Atlantic, with visits to SXSW and CMW. The band plans to return again to perform in more festivals soon. In addition to the infectious music, the accents might help it earn love. On a deeper level, Delorentos seems to tap into the rich music heritage of its home. The music retains the direct and cathartic homespun vibe of Irish Folk. Or perhaps its just wistful speculation. Regardless, American audiences will no-doubt find much to adore in Delorentos. Through no diamond-in-the-rough, Delorentos seems destined for attention on a wider scale than it has so far achieved.

Bullet In A Gun