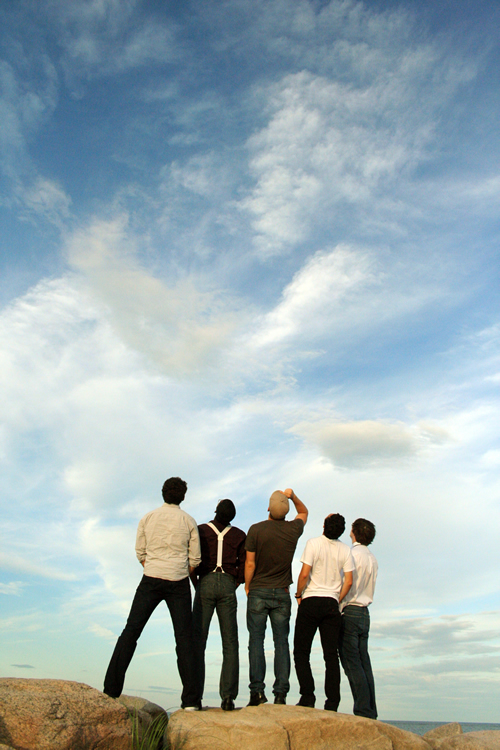 I’m talking about Darlingside, a self-dubbed “string rock” outfit based out of Northampton, MA. String rock is an apt term since, for a band with three guitarists, guitar plays a surprisingly minimal role in Darlingside’s sound, taking a backseat to rich string arrangements. Bass too keeps mostly clear of the limelight, with low frequencies dominated by cello. Vocals also dominate, often in the form of lush five-part harmonies, and drums are the final major ingredient in the Darlingside aesthetic, commanding in both volume and intensity and perpetually diverging from the expected course. The songwriting carefully balances satisfying refrains with a penchant for exploration and, while somewhat heavy handed, is refreshingly self assured in that. Although they’ve been together for only a year, they’ve broken out of their hometown’s venerable but student-centric music scene and have the toured east coast heavily, from Portland, ME to D.C.

The band chalks its eclectic sound up to an “unlikely hodge-podge” of musical backgrounds, which merits some explanation. Harris Paseltiner (cello, guitar) is an accomplished classical cellist who has appeared twice on NPR. Auyon Mukharji (violin, mandolin, saz) traveled to Brazil, Ireland, and Turkey, on an ethnomusicology fellowship, studying and writing about the traditional music he encountered there. Don Mitchell (guitar) toured throughout the states as a boy alto and, after picking up guitar, honed his singer/songwriter talents playing for sunset boat cruises in Maine. Dave Senft (bass, guitar) started arranging vocal music in college as musical director of his a cappella group after which he spent two years as a street musician. Sam Kapala (drums, pennywhistle) began drumming at the age of seven, and his background includes ample training in jazz, funk, hip-hop, and rock. On top of it all, they’re all talented vocalists. In fact, the band met in college while singing together in an a cappella group. Listen carefully and you’ll probably hear all of these influences at play, although they blend together naturally enough that it’s easy to forget how unconventional the mix is.

A-Side “Malea” is the most anomalous and probably the most captivating cut on Darlingside’s debut EP. The band explains that it was originally conceived as contemporary dance piece, which is easy enough to imagine given the strong hip-hop groove, a surprising ingredient amidst the band’s usual blend of rock, pop, and bluegrass. Kapala’s drumming marks this unexpected yet satisfying addition most notably. The spastic dance-club breakbeat he conjures behind the set completely recontextualizes the rootsy and somewhat sinister string groove. The rhythmic hand-clap breakdown during the first chorus is another key instance in which this acoustic ensemble draws upon electronic influences. Granted, this sort of syncopated clapping descends most directly from flamenco, where it is commonly used to accentuate impassioned vocal crescendos and polyrhythmic guitar strumming, but in context, the effect resembles more closely a remixed Justin Timberlake club hit than anything off a Camará³n de la Isla album. Senft’s punchy vocals undeniably have a lot to do with that. His spot on falsetto leaps are soulful ear candy and the way his voice skips on the word “try-y-y-y” screams sampled.

But Darlingside doesn’t use samplers or drum machines. These guys often forgo even electric guitars, opting for an unplugged aesthetic. Oddly enough, you’ll find few instances of acoustic musicians incorporating electronic influences into their style but the reverse is longstanding tradition. Many pioneers of electronic music opted, either by popular demand or a lack of imagination, to adopt acoustic conventions of composition and arrangement. Consider, for instance, Switched on Bach, the seminal recording in which an entire orchestra was replicated on the Moog. But how often do you see a pianist attempting to mimic a DJ scratch battle? And yet, it seems only natural that musicians growing up in the digital age would be inspired by the popular sounds of their generation. What then can we make of Darlingside’s use of acoustic instruments to approximate a glitch-heavy remix? For that matter, what about the breakdown a la Rage Against the Machine in which the expected scorching electric guitar is replaced with equally scorching strings? Listen and draw your own conclusions, but I’m enthralled. “Malea” bumps and rips as much as the sources from which it draws inspiration, but is warmed by a touch of earthiness.

B-Side “Good Man” is a well-crafted pop song tinged with a dose of folk. It’s not so experimental as “Malea” but it better represents Darlingside’s signature rootsy aesthetic. The strings at the beginning make for an alluring intro, evoking a touch of bluegrass until a stadium rock drum beat cuts through the mix with unexpected but pleasing force. However, vocals quickly dominate. Darlingside’s spot on five-part harmonies carry the tune, giving the refrain much of its punch. The bridge provides a nice interlude and allows the lush instrumentals to swell briefly to the front of the mix, but it’s primary function seems to be to set up the epic final chorus which Darlingside delivers in good form.

“Good Man” showcases Darlingside’s vocal talent better than perhaps any other recording on the EP. Listen and it will become abundantly clear that not only can everybody in the band sing, they can all sing incredibly well. I wonder whether some readers may feel, however, that they even sing a little too well. In particular, lead vocalist Senft has a voice worth millions, but this may be perceived as both a blessing and a curse. On one hand, a voice like his seems destined for heavy radio play and sold-out stadiums around the world. On the other hand, it may not be so palatable to indie taste buds. Most indie singers have voices that, at least classically, would be considered less than ideal. The genre prizes those who turn lemons into lemonade, bound by vocal limitations to forge their own unique styles. This naturally leads to a bias against vocalists appealing too strongly to the mainstream. I mention this to urge you, should nauseating comparisons to Jason Mraz or John Mayer be difficult to suppress, not to dismiss Darlingside and keep your biases in check. Focus on how the band utilizes its vocal power and I expect you’ll agree that they’re considerably more versatile and dynamic than any of the pop rock stars you’ve categorically disowned.

Darlingside’s sound doesn’t fit cleanly (or even approximately) into any of the numerous hip subgenres in vogue today. It’s also not the kind of music to be dissected and deified by the avant-garde, for although it’s got plenty to enjoy, it’s not bizarre, challenging, or ironic enough to warrant such attention. However, it’s still a bit too quirky to be lapped up mindlessly by the undeserving mainstream. One might wonder then where Darlingside, alienated from both extremes, will find its most ardent support.

A fair concern, and yet, I can’t shake the feeling that this music has widespread appeal. It’s music that my hip college sister, jazz aficionado father, and eccentric grandmother who only generally only listens to the Beatles, children’s songs, and feminist spoken word poetry, would probably all enjoy. And it’s music I enjoy. Pop sensibilities unconstrained by the pop aesthetic push Darlingside outside the realm of trendy, safely beyond the obnoxious trifling of those who wear their music tastes on their sleeves as a mere fashion accessory, and into deeper and more enduring places.

Purchase the full EP at www.darlingside.com/shop or check out their show tomorrow (the 10th) at Crash Mansion!