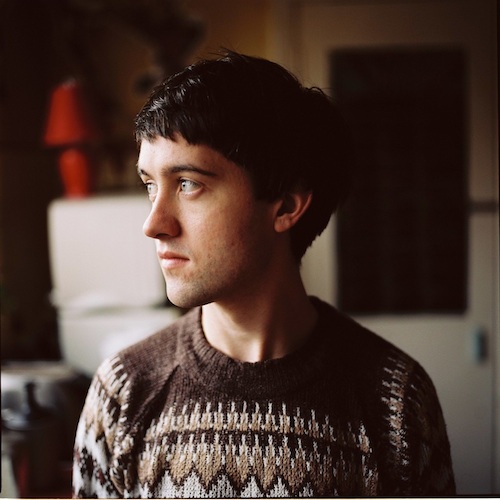 Villagers’ Conor J. O’Brien will probably draw a lot of comparisons to another well-known singer-songwriter named Conor (doesn’t hurt that he looks a bit like him too), but where Oberst’s music, at least in its prime, was all about catharsis and abandon and wild generalizations and accusations that feel really good to yell (no matter how uncool or over-the-top or not-really-true they may be), O’Brien’s is oblique and careful. Subtle, even. His lyrics slip easily from first to second to third person, and even the first person songs seem somehow distanced, easier to hear as a narrative device than a soul-bearing, this-is-the-deeply-buried-truth-about-Conor-J-O’Brien kind of thing. In fact, O’Brien is more interested in the elusive nature of truth than in any grandiose, whitewashed statements. In the quiet, brooding, sleigh-bell touched “The Meaning of the Ritual” (the gorgeous, delicate home-made animation for which (link) is 100% worth your time and happens to be one of the only videos I’ve ever seen that made a song clearer and more powerful instead of just distracting me from it), he sings: my love is selfish and I bet yours is too / what is this peculiar word called ‘truth’. And again, in Ampeater A-side “Becoming A Jackal” : before you take this song as truth / you should wonder what I’m taking from you. This fixation on the mutability of things dominates O’Brien’s lyrics, and actually makes him more of an inverse-Oberst. Rather than shouting the capital-letter Truth, he’s exploring the multitude of truths. The songs are quite decisive, but I have no idea what I am doing, or where I am going, he says in his absurdist press bio, and though some of it may be a faux-naá¯f pose (Once the songs took shape, I asked some friends of mine to help me play them to people. When they kindly agreed, I decided that we would present ourselves as ‘Villagers’ — I don’t really know why.), as contrived as any other publicity stance (PR is inescapably fake; even directness becomes a mediated game of authenticity), it’s still rather refreshing to hear someone say that songs should always be treated with humor, no matter the subject matter, or that his goal in songwriting is to surprise himself. Right on, Conor.

The arrangements in Villagers’ songs are equally subtle and delicate, choosing the intimate gesture over the grand flourish so as to keep the dramatic element of the music subdued. O’Brien’s voice burns with a gentle heat, and you’re more likely to encounter gentle piano-guitar or guitar-bass unisons than washes of strings or booming brass (though there are touches of strings and french horn on other tracks of Becoming A Jackal, the band’s Domino LP). O’Brien has a knack for writing songs that would be perfectly solid acoustic troubadour pieces and then adding just one more section that manages to bring out the the shape of the whole song the way ice brings scars to the surface of your skin.

On “Becoming a Jackal” , a rolling 6/4 tune that manages to seem circular and winding in form without really departing much from convention, this takes the form of the section that begins when I got older. It’s a section that manages to advance both the musical tension of the song and the narrative arc of the lyrics all at once. Finally we get the harmony vocals the song has been hinting at the whole time (with the doubling of key lines like that first always rearranged; the fact that the chorus is sung, doubled, at different places in the stereo spectrum from the verses; and the one tantalizing harmonized line in the second chorus).

At the same time, the story leaps forward. All along the narrator has been daydreaming at the window, both cared for and imprisoned by the song’s you, who in turn is abused by the jackals. Here he finally escapes into the streets, literally following his dream, and learns a new way to move from those jackals. The meaning of the song is elusive, as it should be, but it seems to have at its core a paradox: the need to betray something (alternatively: someone) you once loved in order to grow. It could be anything from rebelling against your parents to “selling out” as a musician, though in this case the next set of lyrics, set against a series of rhythm section breaks that make them stand out like nothing else in the song, implies the latter. O’Brien is literally selling us his fears in the form of songs, but the fact that he knows this and does it anyway gives the line an inverted meaning: releasing songs about how untrustworthy songs are is an act that has to mean he has weighed it out and decided that there is still something important and meaningful that can be conveyed in a song. Once again: right on.

B-side “Twenty Seven Strangers” is more oblique yet, a story of taking a city bus home that simultaneously begs and shrugs off interpretations, but seems to revolve around the anonymity and confusion and powerlessness of city life (anytime anyone sings the phrase fluorescent light you can bet this is what they’re getting at: nothing says urban dehumanization like fluorescent lights). The musical accompaniment is sparse, resigned and melancholy in a lovely way, just like riding home with exhausted commuters in the lighted rectangle of the evening bus. Throughout, reverby wordless vocal melodies, fingerpicked acoustic guitar and minimal drums provide the backdrop for O’Brien’s precise and even lead vocals. Not one thing changes musically in the song until 2:19, when that moment of liftoff arrives (an arranging trick that forces you to really focus on the lyrics up to that point, and also reflects the endless repetition hinted at in those lyrics), just as it does in “Becoming a Jackal” . The harmony vocals and bass finally arrive to fill out the song for the last few lines before a new wordless vocal-piano melody arrives, rising through the crashing cymbals on the first three notes as if it might transcend the song, but then sinking back down in beat-down resignation.

The very end of “Twenty Seven Strangers” is in fact my favorite moment in the entire 7” . The original melody reappears twice. The first time it’s suspended over the full band and drenched in reverb just as it was at the songs start. The second repeat is pared down to just O’Brien’s voice and guitar, the same two instruments with which the song began, only this time his voice is up close, stripped of the distancing effects that hid its texture and flaws. We listen to his voice hold the final, gentle falsetto note and then crackle and sputter out like a guttering candle, the sound of the anonymous soul stepping off that city bus.