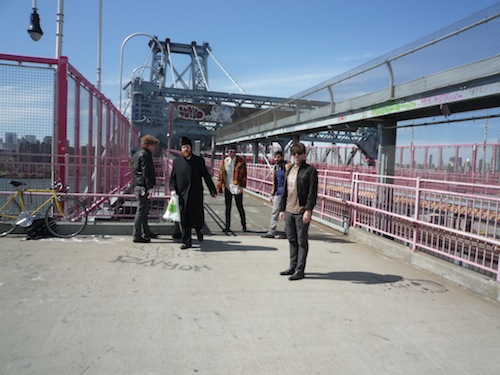 “We’d like to be described as the first band to bridge the gap between Captain Beefheart and The Human League,” said Translations frontman Andrew Fox, as we settled into a coffee shop on the Lower East Side. “Really,” he continued, “we just want to be as rad as what we’re listening to.”

Being as rad as what you’re listening to is a tall order, especially when Suicide, The Velvet Underground, Boss Hog, Dion, and Crystal Stilts dominate your turntable, but Translations somehow manage to pull it off. They’re at once a throwback to New York’s heyday of gritty blues rock and proto-punk, and a much needed push forward into a new era of integration between Manhattan’s rich history of experimental pop music and Brooklyn’s burgeoning indie scene.

Translations is Andrew Fox (vox, Casio SK), and Stefan Pedatella (guitars), with Fox’s longtime collaborators Samer Ghadry and Dave Harrington on bass, drums, and electronics. There’s an electronic element at the core of Translations’ music, but the end result is something that truly swings. The musical challenge set before Fox and Pedatella was to merge their respective visions, and to combine the sounds and techniques of previous generations in such a way that paid respectful homage without relying too heavily on overwrought genre signifiers. The resulting musical beast is well-tamed by Fox and Pedatella, and though they each place Translations at a different crossroads on the map of New York rock & roll, the music they create together serves as abundant proof of their successful collaboration. Fox affirmed, “Yeah, we really get off on playing with each other. And you can quote me on that.”

Pedatella reserves Translations a notch on the timeline of New York bands, as “the next step in New York experimental R&B.” More than most bands, Translations are accutely aware of their place in history, even before that place has been culturally affirmed by more then a small handful of fans and critics. There’s a sense that in order to make successful music in the 21st century, it not only has to be good, but it has to fit inside some unspoken musical trajectory. To a certain extent, all music borrows from and contributes to other music, but there hasn’t always been such an overt need to articulate this until recently. It’s overly optimistic, pretentious even, to discredit one’s influences and attempt to claim status as an utterly unique or seminal performer. It’s just not cool. It’s equally upsetting when an artist lists a host of influences that bear almost no relevance to the music at hand. I hate it when an electro-pop outfit tells me their music sounds like Karlheinz Stockhausen, GG Allin, and “glass breaking”. But when a band is able to articulate its place in the great continuum of music-making, my academic sense of order is somehow appeased. I’m at once able to locate their music in some vague context, and to skip the cursory passthrough in which I struggle to put it in line with its predecessors. I’m instead granted immediate access to the musical content, and I’m able to decipher that content using a set of predetermined schema–a process which makes variations on and divergences from that schema all the more appreciable.

Fox and Pedatella are enormously successful in reducing complex notions of what it means to make music and packaging them as listenable pop songs. Most musicians with the same depth of knowledge would be experimenting on the fringes of the avant-garde, but Translations’ ability to apply this knowledge to ultimately mainstream music is both laudable and exciting. “We want to expand what it is that is our sound, to extend the endpoint that is no endpoint,” Fox told me. Pedatella affirmed, “For us, being creative means taking a folk song from a village in Italy and calling it New York drone.” It’s easy to be “creative” and make absolute shit. That’s been done time and time again by bands that don’t have a clue as to their limits as artists. Fox’s statement above has an abiding wisdom to it–that in order to expand one’s creative potential, it’s imperative to investigate, recognize, and comprehend one’s current limitations. Only then is it possible to locate that endpoint and begin the process of pushing it back into more expansive territory.

A-side “The Wanderer” is a masterpiece of vox reverb, distorted guitars, and drum machine clap tracks. It’s the group’s standout “hit,” and one listen will tell you why. It’s relatively easy to determine what makes a song catchy–a choice vocal melody or a memorable chord progression–but it’s harder to pin down what makes a song truly infectious. That said, let’s take it apart a bit: the vocal verse is more or less a call and response format, interspersed with simple repetitions (“She can talk talk talk”) and punctuated with a chorus of “Ooohs” arranged to emulate old R&B harmonies. It’s these elements in combination that make it one killer tune. There’s also just something about the crunch of the guitar that gets me deep down. If this 7-inch were actual vinyl, the grooves would be worn dead flat on “The Wanderer.”

B-side “The MO” luxuriates over 5 minutes as it collects musical shrapnel scattered about the song–a drum fill here, a guitar lick there–and adds them to its slow sonic expansion. The tune continues to accumulate new elements until 4:25 when it sheds its skin and simply resets. It’s a cathartic moment, and well worth the wait. There’s only so much reverb a man can take, and when the soundscape drops out it’s as though a tangible weight’s been lifted. The fine art of tension and relaxation in music is something that confounds most rock bands. It’s easier to opt-in for one or the other and settle for mediocracy then it is to manage a healthy balance between the two, but it’s a necessary compontent for genuine musical success. Suicide understood this; so did The Velvet Underground and Crystal Stilts. It’s not easy to be as rad as what you’re listening to, but Translations are well on their way to accomplishing this extraordinary feat. Listen to their 7-inch below and catch them tomorrow, June 3rd, at the Knitting Factory as they open the show at 8pm. I’ll be there, won’t you?