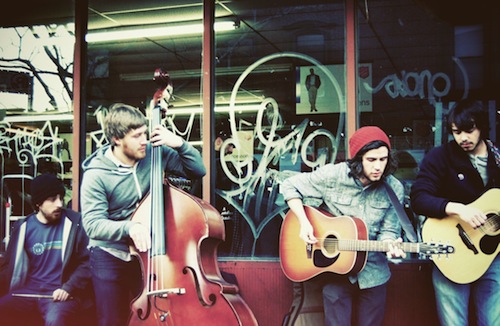 It’s representative of how weirdly smashed together all of our culture is that a band as back porch sounding as Baltimore’s Man&Dog could have gotten their first big push in an Urban Outfitters contest. It would be bad faith, by which I mean bullshit, for me to say that this makes them any less legit than any other band, for while there are a lot of folks out there trying to make pop music that is Art, they are all still trying to make _pop_ular music, and a UO contest is as good a shortcut to renown as any. And though the band sounds like a couple of kids straight out of the midwest, with our unlimited access these days to any kind of music we might desire, aesthetics (in Man&Dog’s case the dropped ‘g’s and acoustic strums and growly vocals) have largely become a choice, rather than the inheritance they used to be.

Man&Dog may eschew the electronic textures usually associated with their city, but there is plenty that’s worthwhile and modern in their music. First, (it’s terrible that I have to say this, but I do) they can actually play their instruments and sing exactly the way they are now doing through your headphones (check out some of the videos of the band playing their songs, there are no recording tricks going on here). Second, the band exists in a lyrical world that, for all its treetops and rolling seas, also includes modern things like turnpikes and prescription pills. Images of the natural world will never lose resonance for us, having roots deeper than anything we could possibly impose on them, but still it can be tiring to hear people who have clearly lived their whole lives in cities and art school dorms rhapsodizing about sparrows and fig trees (I guess it’s touching in that it’s such a clear manifestation of a longing for something more solid and pure than the relativistic cultural chaos in which we’ve grown up, but it’s still hard to take seriously), so it’s nice to hear that Man&Dog are right here in the modern world along with the rest of us. And third, the band plays with form in the pop song in a way that doesn’t interfere with the pure pleasure of big choruses and vocal harmonies, but takes those things and subtly stretches them out in unobtrusive yet satisfying ways. It makes the bands songs stand up to a lot of repeated listening without becoming cloying.

As I mentioned, these tracks sound almost exactly the way the band sounds live (although guitarists Sean Mercer and Danny Townsend, who share lead vocal duties, seem more tempted to burst into solos in the live setting) to the point that if you told me they’d been recorded with the full band all together in a room, I’d believe you. This is a huge compliment. Man&Dog know what they are doing. When I saw them play live, there was an atmosphere of playfulness that only exists in bands who are infinitely comfortable with one another and with their instruments, which makes it kind of astonishing that they’ve only really existed since the spring of 2009. Midway through the set, the band had a brief conference and then paraded through the crowd over to a beat up upright piano to play a song they’d apparently written on a break from painting a house together (which sounds so made up that it’s obviously true), a song they’d never played live before, and, leaning aimlessly on the piano and wall nearby, they proceeded to nail the harmonies as if they’d been playing it for years. It was a gorgeous moment, somehow made even more gorgeous by the drunken audience murmur that threatened to drown the unamplified sound.

A-side “All Day With No Rest” is a lovely melancholy strummer with a perfect chorus that hangs weightless above the rolling guitars like clouds in the summer sky (Man&Dog have a knack for this kind of chorus; check out their song “Brakeman” for another example). The way the melody first resolves down on hide and then up on die is the kind of little touch that makes pop songs so wonderful. There’s also something badass about the second-person lyrics that fits neatly with the roughness of the voices (roughness being something that I mean only to refer to texture, for the singing is seldom even an iota out of tune, even when they break into the big, three part parallel harmonies). One of the remarkable things about “All Day” is that while it tumbles along with the ease of any number of folk rock songs, the form is actually quite unusual. Instead of simply pinballing between verses and choruses, the band trots out five different sections over the course of four minutes, with subtle alterations in feel (notice, for example, the way the tambourine enters on the I don’t need your medicine section, and the way Eric Piccirelli’s upright bass deviates at the same moment from its countrified one three pattern to one that matches the new strumming) and yet the song never sounds patched together or composed. It sounds just as natural and easy as if they wrote it while, say, mowing the lawn.

B-side “A Boat’ll Abide” has a little bit less country and a little more indie rock to it, from the even eighth note feel and the asymmetrical drum part to the fact that it starts with a field recording of the announcements in a German train station. The verse includes a curveball of a second chord that the band navigates seamlessly and melodically before the thumping bass drum enters to propel it into the chorus. My favorite moment is the second iteration of the chorus, in which the band suddenly drops out, leaving the line we are puzzling people to rise up like a mountain from the map of the song. Lyrically, like “All Day,” “Boat” hints at love and mortality but remains just vague enough to seem wiser than any single plucked line could illustrate (it’s also a well known fact that anything sounds profound if it’s rendered in heartbreaking four part harmony). There is a warmth that radiates from both songs, something that comes partially from the acoustic, strumming in the park sound of the instrumentation, but partially from the attitude of the lyrics. The songs touch on seriousness, but they’re never mired in it. They find space for wordplay (the puddle/puzzle jump in the chorus of “Boat” ) and optimism (There’s a road just a little bit farther). It’s a mix of dark and light that makes Man&Dog perfect for spring and fall. They encapsulate the hopeful melancholy of the changing seasons that is so addictive.

It’s no coincidence that Man&Dog conclude their bio, after the usual list of their accomplishments, with the note that they are working on expanding the range of their music in the time to come. The fact that the band openly talks of wanting to do more than they’re currently doing is wonderful and rare. This should be the ambition of all bands: to make something better than what they’ve already made. Thankfully, Man&Dog know this, and these great songs will only be the start of a long arc of great songs.

All Day With No Rest