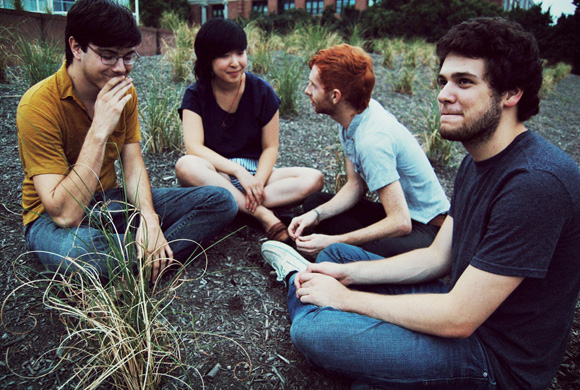 A while back, my housemate Mark slipped a CD under my door with a note that said “These guys are playing in our basement.” I tossed it in my “listen to this eventually” pile and went my merry way. Weeks passed, and I still hadn’t laid an ear on Mark’s CD. Then one night I noticed a sizable crowd of hip young people (no, not hipsters, just hip people) gathering in my backyard for a vegan potluck (OK, maybe they were hipsters). I went on preparing my own dinner and thought nothing more of the assembling masses. Then, as I was digesting my feast in the living room, some sweet sweet sounds began wafting up through the floorboards. The vegan potluck had turned concert, and I remembered the long lost CD that Mark had so nicely compiled in preparation for the show. The first band was good, but not so good that I wasn’t content to listen through the heating vents. The second band was Saintseneca. Within seconds of their first downbeat I found myself leaping downstairs and pushing my way towards the front of the crowded basement. This was one of those absolutely magical moments, in which you’re reminded why you spend weekends at open mics, why you sift through the dollar record bin at flea markets, and why music is the single most powerful means of communication between human beings. It’s worth seeing a thousand Nickelbacks to catch even a moment of Saintseneca. These guys are the real deal.

If the term “folk” means anything anymore, it means a different thing now than it meant in 1962, and it meant a different thing then than it meant in 1942, or 1922. Folk is a feeling of permanence in music, it’s a sense that a certain kind of song is fundamentally immortal. It represents something more important than a genre. Folk-rock, neo-folk, and freak-folk are just bogus terms to describe people playing acoustic guitars who have hair styles of varying lengths. But folk itself is something persistent. A good folk song is shared across generations, and is acknowledged both in its own time and in subsequent times as capturing some barely perceptible facet of the human condition and laying it bare in the plainest of terms. A folk song doesn’t have to sound like Woody Guthrie, though Woody Guthrie did write folk songs. The Beatles were a great band, but they didn’t write many folk songs. The Band, on the other hand, were less widely acknowledged as a great band, but wrote almost exclusively folk songs. Folk songs are still being written today, and will continue to be written until we cease to exist. For example, Kristian Matsson is a folk artist. Devendra Banhart is not a folk artist. Fourtet is. Panda Bear is not. Think about it.

Saintseneca are a folk band. Not just a band that sounds like a folk band, but a real honest to god folk band. There’s a genuine quality to their music–genuine hope, genuine sorrow, and genuine redemption. Seeing them play in my basement was like going downstairs to do laundry and running into Bob Dylan sitting on the floor scribbling notes about Moses and the revolution. Maybe the most charming thing about Saintseneca is that they have no idea how good they are. And so, I feel a little bit like it’s my duty to proselytize for their cause, which is about as worthy a mission as I’ve yet encountered. Though the band officially formed two years ago, Zac Little (guitar, banjo, dulcimer, stomps, claps, vocals), Luke Smith (trash can, guitar, dulcimer, stomps, claps, vocals), and Steve Jacobs (guitar, banjo, trash can, stomps, claps, vocals) grew up as childhood friends in a small town in Southeast Ohio, and played together in rock bands throughout high school. College, however, presented them with limited practice space in which to get their rock on. Little had a stockpile of acoustic instruments, so they decided to work with what they had and began rehearsing as an acoustic band in Little’s minuscule apartment. Around this time, Grace Chang was pulled into the group on violin (not to mention stomps, claps, and vocals) and Saintseneca officially came into being.

Maybe it says something about the group’s eclectic and yet perfectly integrated sound that its members are studying everything from business and textiles to sculpture, architecture, and musicology. The songwriting process is largely collective, with Little composing shells of songs that get fleshed out and embellished during rehearsal. Little told me, “I intentionally leave anything I do as sort of a skeleton and then everyone in the band sort of rewrites the song when they add their own parts. This has always seemed pretty important, I think you get something more interesting when more minds go into it. Ideally by the time they are ‘done’ we’ve got a song none of us could have written completely independently.” It’s this collective method of composition that solidifies Saintsenca’s identity as a folk band. So much humanity goes into each song, that this overflow of emotion ripples back into everyone who listens. Some bands really require an audience–they feed off the energy of the crowd, absorb it all, and give it back in spades. Saintseneca isn’t one of these bands. They’re an independently fueled ball of energy (think Iron Man’s arc reactor) that generates its own kinetic frenzy and passes it on to anyone within earshot, be it one, two, ten, or a hundred people. This is rare, and precious.

Side A to the Saintsenca 7-inch is taken from a mixtape for Shout Out Loud screen printing, and is one of the band’s newest songs. “Wonderlust” opens with a driving dulcimer and kicks in with the band’s customary assault of trash can percussion (literally, an overturned trash can), acoustic guitar, and violin. The harmonies alternate between soothing and piercing, and inevitably evoke comparisons to the glory days of Neutral Milk Hotel. The lyrics float through the song at a leisurely pace, giving listeners plenty of time to contemplate lines like “If you could only be one age for all your life, I wouldn’t turn a year older or otherwise.” A simple sentiment, true, but it’s the kind of line that turns round and round in your head for the rest of the day, inspiring alternating bouts of excitement and profound sadness.

Saintseneca embrace the long lost art of not giving a fuck what their recordings sound like. Most bands that make shitty sounding records do so as the result of a deliberate decision to create a lo-fi aesthetic. It’s all too easy to make a great sounding record with almost no professional equipment if you’re an electronic band (ever listen to Magic Man?), but acoustic instruments demand a little bit more attention. That said, some of the greatest records of the last millennium were recorded using a single room mic, and I like that Saintsenca’s recorded songs have the same “now gather ‘round the microphone, people” kinda vibe. That’s not to belittle the recordings on this 7-inch–those expecting sonic mastery should simply re-prioritize. Listen to nothing but Folkways field recordings for a couple months, that should set you straight.

Side B “Cold Water History” is a gem from Saintseneca’s earliest recordings. It was one of their first songs, and existed only on a handmade CD that hasn’t been available in recent years. We’re thrilled to feature it on this 7-inch. A bit more subdued than “Wonderlust”, it’s nevertheless equally inspiring. Built upon a repeated guitar line, the song unfolds from the first verse into a beautiful chorus propelled by unison footstomps and a soaring violin melody atop the fray. Strings and brass are oft-maligned timbres in popular music, primarily because they’re so poorly implemented. The arrangement matters, and just as Jeff Mangum found the perfect use for brass on his records, Grace Chang’s violin is an integral part of the group sound, and turns what might have been a good chorus into a great one.

I feel a bit like Alan Lomax in presenting today’s 7-inch. I’m certainly not the first person (or the first music writer) to discover Saintseneca, but in so much as I heard them for the first time entirely by surprise and in my very own house, I can’t help but admit that this review feels a bit different than usual. There’s a real sense of discovery here, in that Saintseneca’s music has since become a part of my life. I really entreat you to go out and purchase their vinyl 7-inch and cassette tape over at Paper Brigade Records. I bought both at the show, and for someone prone to adorning his life with a running soundtrack, they’re absolutely indispensible.