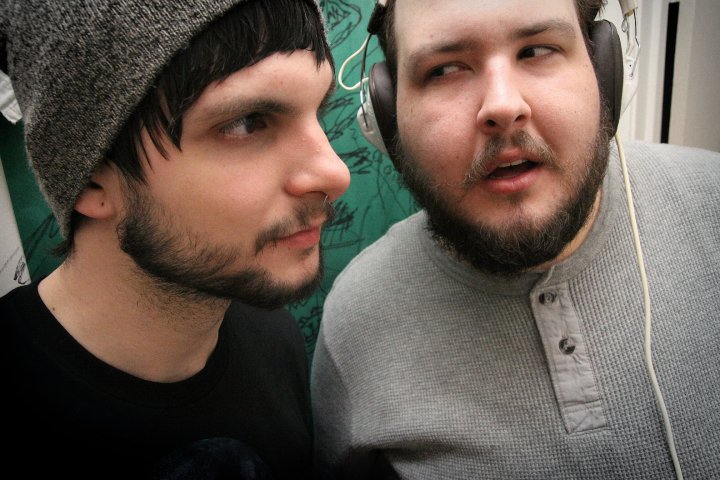 This could be a one sentence review: Stepdad embodies all that was good about the 80s, and all that is good about the current indie movement. Period. That’s glowing praise, I know, but I’m not wrong. These tracks hit the Ampeater submissions inbox and promptly knocked every other song off my weekend playlist. It was all I could do not to break out the neon green jumpsuit and rock out to some 8-tracks. The two pop masterminds behind Stepdad go by Ultramark (vocals/synths/programming) and Cobrazebra (synths/programming/guitar), and unabashedly claim Tears for Fears, Abba, and Duran Duran as their primary influences. Aware that this might raise eyebrows, they add, “And it doesn’t suck, I promise.” This, my friends, is an understatement for the ages.

The group came to be in summer 2009, incubating in a sweltering Chicago apartment and hatching in Grand Rapids, Michigan. The results of their fruitful collaboration can be heard on the EP “Ordinaire”, which is available for free download via Stepdad’s bandcamp. The songs for their Ampeater 7-inch are culled from this release, so if you’re still hungry after two tracks, there’s more to be had without reaching for your wallet. Side A “Jungles” is the group’s standout hit. Opening with solo tambourine, the song ascends on a crescendo of evolving synths, until the beat drops with a drum loop that would make even Jan Hammer cower and admit defeat. But at this point, I wasn’t entirely sold on the song, or the band for that matter. The vocals enter with a tasteful dose of what sounds a whole lot like autotune (gasp!) and conquer that precious middleground between awesome and coulda-been-awesome-but-came-out-contrived. Even Bon Iver’s attempted use of autotune comes across as less than perfectly executed, but this is the kind of music that accepts (nay, demands!) these kinds of vocal trickeries. It’s the chorus that takes this song from good, skips past great, amazing, and spectacular and propels it straight to “fucking awesome.” It’s hard to get a foothold in this song–it glides so naturally from chorus to chorus that its almost 5 minutes seem like 2, and I haven’t yet listened through it without pressing play again only seconds later. When it ends, the world somehow seems dull, like watching Planet Earth on a big HD TV and then looking away at your shitty apartment and wondering “How did they make TV look so much better than the real world?” Maybe it’s the fact that the song sounds like it was composed inside a massive reverb chamber, or that it would take three orchestras and two choirs to perform live with acoustic instruments, but something about it generates the aforementioned Planet Earth effect. Maybe they should get David Attenborough to narrate their next album.

Side B “Wolf Slaying as a Hobby”sounds like the endgame music to every RPG I played as a kid…and continued to play through college…and still play now. Somehow the combination of lines like “their eyes bleed while my claymore catches moonlight” and persistently spritely synths have a euphoric effect not unlike the feeling I get on my birthday, the night before Christmas when I was 10, or when talking to girls with no physical or mental deformities. The tune starts slowly, building ambient synths over something resembling tuvan throat singing, until the verse kicks in with an infectious melody and vocals worth giving a second, third, or tenth pass. Stepdad’s decision to layer the vocal chorus with a unison synth part is the brilliant move that makes this song almost as special as “Jungles.” As “Wolf Slaying as a Hobby” winds to a close, its rhythmic parts drop away, bearing an almost naked vocal line, totally solo, and sung in a natural register (something seldom heard anywhere in these two tracks). It’s a revealing moment, in which we see the wolf hunter without his bold adornments. He sings, “Now, every time I get a little brave, it bends me out of shape, every time I catch a little break, I’m dying.” The song’s protagonist is at once cast in a new light, and I’m reminded that there is indeed a human being behind this wall of synths. It’s a peek into the character of the song, true, but it’s also an insight into the brains behind Stepdad, two dudes so elusive that they won’t reveal their real names. It’s a rare glimpse, and it’s a special one. Unlike folk music in which the artist is bearing his open soul, or rock music in which he’s flaunting his flamboyant character, electronic music lends itself to a kind of quiet seclusion, in which the artist is by and large hidden from view and the work stands alone in place of its creators. Well, I’m cool with that, especially since the songs Stepdad’s left us to ponder are so freaking good. Ultramark and Cobrazebra, whoever you are, and wherever “Michigan” is, good luck, godspeed, and keep it comin’.

Wolf Slaying as a Hobby