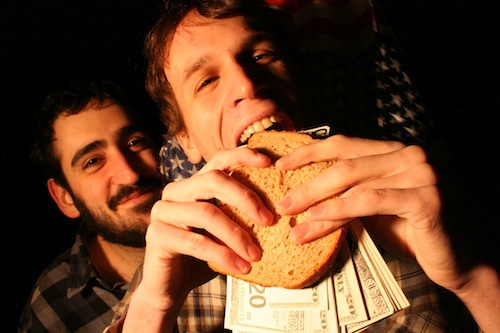 Uncles is a collaboration between Dan Bateman and Will Schwartz, two Queens-based songwriters who grew up together in Yonkers, NY. Seriously? If you’ve jumped straight to the music and are only now reading these words, as I’m wont to do, you’re probably thinking to yourself, “bullshit, these guys are from the farthest reaches of Appalachia.” But sure enough, Bateman is a born and bred New Yorker and his thick southern accent is present only when sings. So, it’s contrived? No, it’s quite the opposite. As a child, he would often go down to his family’s acreage outside of Birmingham, Alabama, where he was introduced to music by his grandfather who would sing for him in that same thick southern accent.

When you’re a baby, you don’t know how to categorize. You see an apple and it’s an apple. You see an banana and it’s a banana. You see a carrot and it’s a carrot. As you grow up you learn that the apple and banana are fruits while the carrot is a vegetable. Similarly you learn that the bowing of a violin and the beating of a drum are music while the revving of a motorcycle engine and the rustling of the wind through the trees are not-at least until you study musique concr__á¨__te in college and unlearn it all. But I think that even as an adult, we’re prone to a sort of biased essentialism, through which our definition of the category is skewed by our experience with the specific. When I think city, I think New York City. When I think cat, I think tabby cat, because my family kept one as a pet when I was young. And I suspect that when Bateman thinks music, he thinks of the music his grandfather used to sing for him as a child in Birmingham. And so, while Uncles is plays a lot more than just folk, it’s clear that folk is at the core of the music that they create.

Bateman and Schwartz have been playing together since middle school. Bateman would return from his childhood trips to Alabama and work with Schwartz to develop the songs he had written there. By early high-school they had begun seeking out band members among the regulars at open-mic clubs, and they played their first show together at the tender age of 16 in Yonkers. After positive reviews from coworkers, they soon took their act to New York City, where they both eventually attended college. As time went on they broadened their musical horizons and began to drew inspiration from more varied sources. In particular, they cite the influence of classic 90’s indie rock outfits such as Pavement, Guided By Voices, and The Pixies, and C&W singers like Hank Williams, George Jones, and Townes Van Zandt. By adulthood, each had developed an eclectic musical and compositional voice and together they gained recognition performing at New York City’s folk and indie-rock dives, as well as at nearby Wesleyan, Bard, and Vassar colleges. In addition to Bateman and Schwartz, Uncles utilizes a rotating ensemble to back their songs which includes a double bassist, violin, pianists, and drummers. Their performance is musically diverse, with different members of the ‘Uncles Ensemble’ bringing their training from free jazz, classical, and folk idioms to support the songs.

But vocals are the central feature of Bateman and Schwartz’s songwriting, thanks to their surprising delivery (Bateman’s rough country drawl) and their their content, which spans all topics, from the most mundane to the profound. “There’s a lot of sex,” they explain, “some urban grit, a fair share of plaintive mid-western balladeering, tales of nursing-home dementia, and plenty of violence, too.” Basically, there’s something for everyone. Only when you listen to the lyrics does it really hit you that this band is not from Alabama but from the Big Apple’s extensive sprawl. I would never have made the comparison after only hearing their music but after seeing the lyrics on paper, I instantly thought Tom Waits. The sex and urban grit are expressed in a piercing but beautiful beatnik prose.

A-side “Settler’s Song” begins with a sentimental and folksy guitar guitar riff which Bateman’s vocals cut through. Gradually atmospheric textures and percussion (really, it’s just a few well placed clicks) flush out the sound. Schwartz’s harmonies also give the song a lot more punch. But it’s the lyrics that hit hardest. They’re impressively vivid. Phrases such as, “I wanna hear my shit pumping from an SUV down a side street bend,” sound a bit funny in Bateman’s signature Appalachian drawl but try and look beyond the irony, because this isn’t The Gourds’ cover of Snoop Dogg’s Gin & Juice-it’s a portrait of a neighborhood. Bateman begins, “In the days of Settler’s Songs,” an image which evokes a distant past, but as the song unfolds, it describes the modern day settlers of a decidedly urban environment.

“__Babysitters feed Hi-C To little foreign boys screaming and sucking on their sweatshirt strings… Cracked and torn, faces scorn Dominicans sipping 40 ounces Sitting bent up on the metal grate on the nail salon”

The imagery is fresh and precise. “Settler’s Song” culminates with the most resounding image of all, a grandmother singing her settler’s song to God’s son upon the mantel. Evoking a Russian folk tune and the American western frontier, she sings:

B-Side “Where Does It Sleep” features Schwartz in the songwriting roll. It’s less catchy (read: less poppy) but every bit as potent. Acoustic guitar, electronic textures, and a bowed upright bass provide a solid foundation for the vocals. Again, the lyrics are the focus and because the song is rhythmically more sparse than “Settler’s Song” and with pauses between most phrases, it’s a little easier to digest each image separately. My favorite verse:

Uncles’s debut album, Replacing Words with Other Words-incidentally one of the most wonderful album titles I’ve heard in recent years-will be released on Friday, April 24th and will be available for free download on Ampeater for a limited time. To celebrate the release, Uncles will also be throwing a party at Littlefield’s in Gowanus at 8:00pm. It’s a telling sign that Bateman and Schwartz have been playing together since middle school and are only now releasing their debut album. Replacing Words With Other Words is the product of a many year cycle of writing, recording, and subsequently scrapping original material and the ten songs that made it through that process are spot on.

Where Does It Sleep