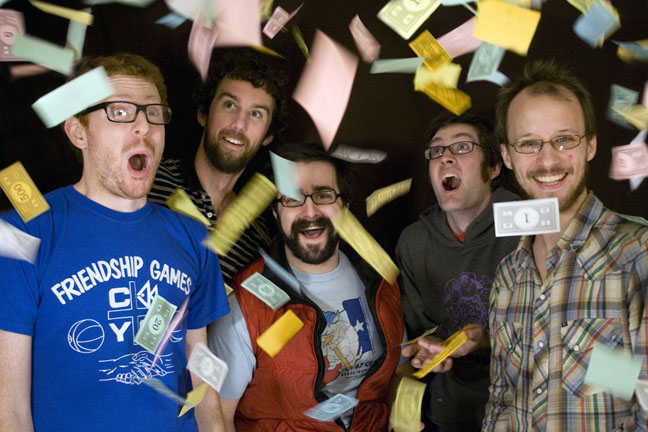 There’s a part in the Beatles anthology in which Paul talks about the scarcity of resources for young rock musicians in 1950s Liverpool. Without money to purchase records, and without record stores willing to carry rock ‘n’ roll music, the pre-Fab 4 sat with their ears glued to the radio with the hope that they’d catch a snippet of something hip. Times have changed, the internet’s here, and with it is a ridiculous oversaturation of musical content in every style and genre imaginable. Not only is buying music a thing of the past, but getting people to listen to a whole song (let alone an entire album) is becoming increasingly difficult. There are bands and labels out there making unbelievable music that literally can’t even give their records away. By now you’re probably wondering why I’m opening a perfectly normal review with this dreary state of the union nonsense. Well, because I’m an asshole, and MiniBoone almost didn’t make it on The Ampeater Review.

I open every song we receive hoping and expecting it to be the single greatest thing I’ve ever heard, a magnum opus, the hidden gem of our generation. Really, I do. Besides, it’s a small letdown when a submission isn’t up to par, and it’s a huge thrill when I discover something new and exciting. When MiniBoone hit my inbox, I opened A-side “Devil In Your Eyes” and listened. I listened some more. I listened, and that little voice that makes me do things like start fires and reject bands started warming up. Uh oh. But just as I made a move to trash the whole operation the song began to build…and build…and then at 1:11, it erupted into one of the most exuberant, spontaneous, and wholly enjoyable choruses I’ve heard from a rock band in ages, maybe ever. What was I thinking, to have come so close to sending MiniBoone to the nether regions of my recycling bin? Is this what we’ve come to? I don’t want to be responsible for the death of music, and well, I think I came mighty close just there. MiniBoone, I’m sorry, you guys are amazing and as my penance for almost giving you the axe, I’d like to make sure the whole world knows what brilliant music you’re making.

So let’s back it up a bit. It’s not that Miniboone’s “Devil In Your Eyes” is a lame venture with a redemptive chorus–not at all. That’s just how MiniBoone rolls. They come from a world where the Talking Heads reign supreme, and where people have attention spans that last longer than 30 seconds. I think it’s the same place Frank Zappa has a summer home, wherever it is. Craig Barnes (Guitar, Keyboard Vocals), James Keary (Guitar, Keyboard Vocals), Doug Schrashun (Guitar, Keyboard Vocals), Sam Rich (Bass), and Taylor Gabriels (Drums) excel at packaging remarkable musical complexities into feverishly catchy pop songs, so much so that it’s easy to breeze through their 7-inch without fully appreciating how difficult it is to produce something both quirky and impetuous that doesn’t necessarily come across as such. “Devil In Your Eyes” should have a little sticker on it that says “Caution: This song comes spring-loaded.” Each unison chorus propels the next verse forward with such energy that by 2:23 it’s got no place left to go and pulls a Layla, dropping us off into an extended guitar solo and outro that’s at least as memorable as the song itself. The now infamous first minute of this song (remember, the one I didn’t like?) makes sense now–it’s a slow build into that first chorus, after which the elastic snaps and flings us towards the outro at breakneck speeds. In fact, I’d go so far as to say that the song needs a slow build, it needs a minute to warm up, like cold pizza, or a space shuttle. Yeah…a space shuttle. Just give it that minute and you’ll be damn glad you did.

I haven’t seen MiniBoone live (yet), but I imagine the experience would be something like freebasing cocaine while doing windsprints on a rollercoaster. The most exciting music isn’t always the most frenetic, and MiniBoone is a case in point. Side B, “Cool Kids Cut Out of the Heart Itself” is an experiment in highly controlled catastrophe, alternating between sections of total distortion and vocal stopgaps for momentary composure. MiniBoone manages to overwhelm the senses without taking up every last inch of the musical soundscape–there’s space to breathe, to ponder the music as it’s happening. But not too much. It’s a carefully (and perfectly) constructed balance that most bands struggle to find and never quite achieve. Like “Devil In Your Eyes,” “Cool Kids” overheats by 1:04, and takes its time building back up to a grand finale. It might be a formula (it’s hard to tell on these 7-inches), but if it is, it’s a great one. MiniBoone’s music doesn’t inspire me to take up painting, it doesn’t move me to tears, but it’s not trying to. It’s doing something very simple, very honest, and very important–inspiring joy. This is music to make sunny days even sunnier, and rainy days not quite so bad. It’s light without being frivolous, and serious without succumbing to the disease of douchey pretension that’s been sweeping across Brooklyn over the last couple years.

Somewhere in my parents’ house is the record “Climbing” by the band Mountain, perhaps best known for the rock radio superjam “Mississippi Queen.” On the back is written, “THIS RECORD WAS MADE TO BE PLAYED LOUD.” Of course, now I understand that from a technical perspective it’s referring to how the record was mastered and cut, but back then I took it at face value. If it was meant to be played loud then what choice did I have? So I cranked the sucker until the walls shook. Well, if it’s ever been true, THIS 7-INCH WAS MADE TO BE PLAYED LOUD. There, I said it. Turn up those speakers and let MiniBoone invade your brain. You might even do something crazy, like dance.

Devil in Your Eyes

Cool Kids Cut Out of the Heart Itself