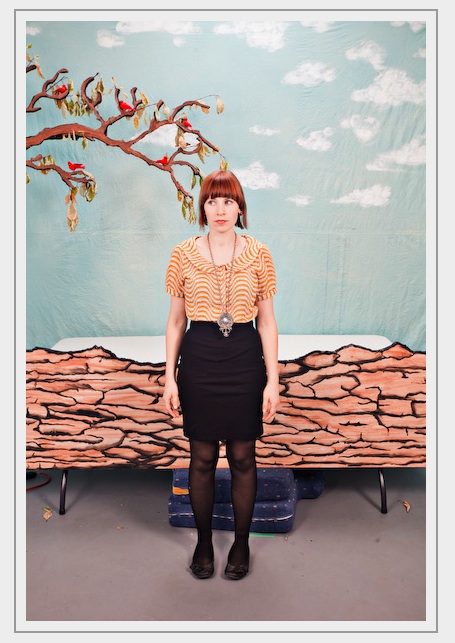 Here at Ampeater, we’re not ashamed to say that we love Canada. The bustling Toronto scene has been a neverending source of marvelous music for us to present triumphantly to the open-eared public: Evening Hymns, PS I Love You, The D’Urbervilles, and now Kat Burns, aka KASHKA. Burns’ gorgeous voice and sharp songwriting skills (you try and slip the word “dendrophiliac” into a song without sounding like a jerk) help make the wonderful Forest City Lovers what they are, but occasionally, prolific as she is, she churns out some songs that don’t quite fit into the FCL template, and so she’s taken on the KASHKA alter-ego to begin releasing those songs, which swap the Lovers’ sunny summer acoustics for a subdued, wintry electronic sound, probably more appropriate for Toronto.

Burns describes KASHKA as “the outlet that many of my songs drift into when they feel like they may float away otherwise,” and you will instantly understand what she means. Rather than the roots and leaves of FCL, KASHKA songs sound like streetlights refracted through icicles. They are wintertime compositions (both were literally written during the darkest evenings of winter), sonically filled out with chiming keyboards, tinkling bells, large spaces, and Burns’ lovely, pure voice, which, aside from carrying the melodies, functions as pretty much the best synthesizer ever, whether she’s creating warm choruses of chordal oohs, fuzzy lead lines between verses, or serenely floating contrapuntal melodies á la a string section. The thing that carries over from the Lovers is Burns sense of precise and tasteful simplicity. She knows in either case that her voice and knack for melody will carry the song, and intelligently refrains from throwing any kind of half-baked, overly adorned arrangements into the mix. Her vocals are mixed to the front, so that they may lift the weight of the song, but they are not pushed as far forward as is common to most electro-pop and they don’t share the ridiculously melismatic neo-soul that tends to make you feel like someone spliced some vocals in from a recent American Idol audition. In fact, it’s easy not to notice how wonderfully skillful a singer she is until you start realizing how many of the sounds that fill out the airy space of these songs are not keyboards but rather her voice.

Making electro-pop (making good electro-pop, rather) has a couple of inherent challenges, both of which KASHKA rises to effortlessly. First, for your voice to slot nicely among all the pristine synth swells and gentle blips, it has to be as on pitch and tightly controlled as your SK-1. As you can hear in pretty much any moment of her Ampeater single, this is not a problem for Burns, whose voice is as agile as it is pretty, and somehow never cloying or tiring in the way of so many singers gifted with exceptional vocal cords (this quality probably owes a lot to her aforementioned intelligent restraint). The second major challenge is that when you’re creating a music that essentially exists only in digital space, and never as a full set of live sounds in a room, it’s really easy to succumb to the temptation to layer the hell out of it (I know this because I pretty much always do so, no matter how pure my intentions are when I set out). This is true of all recording done mostly by overdubs, but I think it’s a special difficulty with electronic music, which has no acoustic corollary, and in which it is easy to get excited about different synth sounds and just turn everything into consonant-sounding mud, which is one of my least favorite sounds (it is a term that is also applicable to jam bands). KASHKA never has this problem. Her music, with its softly muted beats and warm clouds of voices, is perfectly refined and alluring. There’s not a hair out of place, and there are no screams for your attention, and this is precisely why it holds your ears so easily.

Despite the refinement and unflashiness I’ve been harping on, KASHKA doesn’t come across as sparse or stark because those words imply a kind of spiritual darkness that just isn’t there. Though the songs are wintry, they are full of the warmth of huddling up by the fire after a long walk in the snowy evening, full of hope in the face of adversity. The first lyric on A-side “Hands In” is, in fact, “put your hands in my heart tonight / just warm them there,” which is all about love as a balm for cold weather, cold weather being of course a shorthand for the larger cruelties of the world. The song begins with a quick but relaxed three note keyboard pattern that manages to provide the entire harmony of the verse without ever playing a single chord. The harmony is so simple that we don’t need any more for our ears to understand exactly where we are, and what’s brilliant about it is that we barely get any more: another, far quieter, single-note line, some muted percussion. Eventually some single-note guitar appears, along with some distant jangling bells, a light keyboard melody, and some tom fills that always seem to signal the arrival of hugeness, yet which always lead to nothing, not even a crash on the downbeat. All these elements slowly and gradually coalesce to create the filled out song, and just at the moment when you hear this, it slips away, leaving only the echo of the bells (which are brilliantly buried in the mix so that you may not have even noticed them until this precise moment). The only response is to listen to it again.

“Lonely Creatures” begins with an absence as well, withholding all the low end through the first verse to achieve that untethered, airy sound before eventually culminating in the busiest, thickest sound on the whole single, which is of course still rather delicate. My absolute favorite moment in the song only comes once (of course), and it’s right at 2:15, in the middle of the chorus, where Burns comes in with an ethereal ooh which is broken up into sixteenth notes in a way that echoes the rolling beats of the chorus and calls to mind images of rippling water. But it’s hard to even pick a favorite moment in “Lonely Creatures.” All of the background vocal work is unbelievably beautiful, and so is the third repetition of the chorus line, when it slides up with the ease of warm breath rising into cold air. The call for all the lonely city-dwellers to come together and create a spark of heat together is a perfect call-to-arms for someone concerned primarily with spreading love and warmth, and though it makes for a stark contrast with the “icy breasts of morning” and catalogues of inhibitions in the lyrics, what stays with you after listening is not the icy expanse of the backing track but the humanity and warmth of Burns’ voice, reminding us that, when faced with the harsh winters of the world, our greatest asset is the heat radiating from our bodies and the love radiating from our hearts.

P.S. If you were wondering how “Lonely Creatures” would sound if you accidentally played Gyorgy Ligeti’s “Atmospheres” over it, the answer is REALLY, REALLY AWESOME.