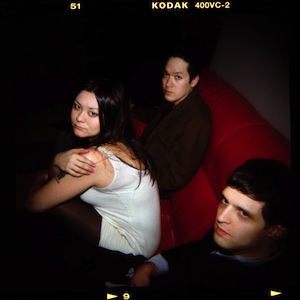 Susu is an aggressive artcore machine out of Brooklyn with one setting (loud) and no off switch. Their full-throttle sound is a welcome holdover from their beginnings as a larger hardcore/postpunk outift called Surgery Sunday. The rock-n-roll laws of attrition whittled down this original group to Andrea Havis (guitar, vocals), Mike Gabry (bass, vocals), and former-drummer Justin Bilicki, prompting a namechange to the shorter Susu. The leaner, meaner unit hooked up with engineer Martin Bisi to record their self-titled debut in 2006. Bisi, whose credits include John Zorn, Sonic Youth, and Bootsy Collins, helped Susu find their signature hard-driving, paint-peeling sound. “I think his influence was mostly present in the actual mixing and capturing of the song and sound,” as Havis recalls, “His drum sound is amazing. He really brings the instruments to life.”

One lineup shuffle later (Bilicki out, Oliver Riviera-Drew in) Susu found the loud and proud trio that has made a name for itself with three subsequent releases of pure sonic onslaught: Win, S/T, and their latest full-length R and R and R. The common denominator on all three releases has been a taste for defying conventional song structure. Experimentation, as Havis describes, “…is about going over the line of what would be traditionally done in a “song”, or doing it in a way that is outside the normal expectation. It’s not necessarily reliant on how it will be received/perceived, but chosen because collectively we (Susu) all enjoy it, or it moves us to build upon it.”

Eschewing standard verse-chorus-verse formats, R and R and R is a provocative musical statement that will command you to attention with all the authority of a drill sergeant on acid. Most of the sonic vocabulary, the raw guitars and the howling vocals, are reminiscent of the textures of the No Wave scene of the 80s. Intense, raw, a little bit dangerous. Much of the avant-garde music that came out of New York during the 80s proved tremendously influential. But when you go back and listen to the recordings of early Sonic Youth, Theoretical Girl, and so forth, you can’t help but feel the dingy audio doesn’t do justice to the music. Even the “high art” symphonies of underground legend Glenn Branca sound pretty shoddy (Wharton Tiers didn’t quite have his “A” game going yet). Susu rescues some of the musical possibilities that are only hinted at in those old recordings and reconfigures the elements in Rauschenbergian, No Wave assemblages. The sonic collages are sometimes punky, sometimes proggy, and don’t balk at trying something new. Drummer Riviera-Drew remarks, “We tend to flutter around a few ideas, then hover over one that seems to be of good quality. Much like honey bees pollinating flowers.”

The A-side of the 7” , “M.B.T.” , comes off the R and R and R album, on which Susu teamed up with producers Keith Souza and Seth Manchester. “M.B.T” takes a few elements, acerbic guitar licks, Kim Gordon-howls, frenetic bass lines, and the spitfire drums of Oliver Riviera-Drew, and weaves the minimalist, iterative designs into a bracing artrock tableau. In a time when independent music seems overrun by synth textures and somewhat foggy composition, the unrelenting precision and musicianship of Susu’s analog sound is genuinely shocking. Susu is tighter than a guido’s abs. The band flexes in a single unified motion, hurtling songs forward at breakneck speed and changing tempos at the drop of a dime. “M.B.T.” is not the sort of song that could be written alone in your bedroom on Garageband. The material on R and R and R was written in a collaborative procedure. As Havis describes it, “…Everything is worked out real time. We get together and improvise, jam, what-have-you, until someone has this part sticking out that everyone is feeling. And then we tuck it away into our memories. And so on. Eventually we have these 5-25 parts that we name arbitrarily (but all understand), and someone will hear something that goes together. [For example] the ‘chicken part’ would sound great with the ‘cheerleader part’. And eventually we put them together and move the pieces around and we have a song.” The result is a level of organic unity and cohesion that holds their music together even as the compositional forms push the structural boundaries of what we expect to hear out of a pop song. The result is, in short, art.

But don’t let the loud noises and artcore machismo fool you. Susu can be goofballs when they want to be. The track “Las Sirenas” off their latest album will have you searching for your Spanish-English dictionary, and they’ve been know to bust out absurdist lyrics like “I’ve got a roof/With a view/For when I wake up/And don’t know where I am” on “Clean vs. Dirty.” Naturally!

For their B-side, Susu brings it all the way back to 1983 with a cover of the Gloved One’s epic single “Billie Jean.” On the selection of the B-side, Havis remarks, “It’s just a killer song. Mike just started whipping out the bass line constantly so we decided to cover it since it was so fun to hear. That whole album is truly incredible (obviously!). And then he died. And we happened to be going into the studio.. It’s sort of a de-stresser song for us so we did it after we had tracked the record.. Just a quick take.” Riviera-Drew and Gabry hold down the rhythm section while Havis floats the dark, brooding melody over the top. The result is haunting yet danceable, as if all those zombies from the Thriller video picked up instruments and started jamming. The King of Pop would have approved.

It’s the combination of artcore firepower and absurdist flair that makes Susu special, and this 7” is a nice little introduction to their musical, Susu-ical vision. For the full experience of the brash trio out of Brooklyn, go check out an album or live show. The faint of heart (and short of humor) need not apply.