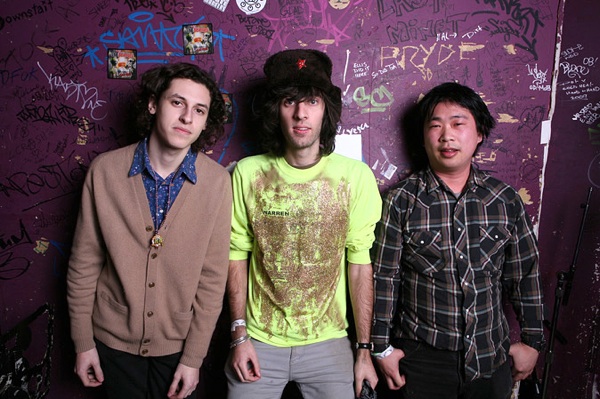 Some bands begin with an idea. Most of these ideas are bad: maracas, choirs, bassists wearing hats, putting a pool on the album cover. These are all bad ideas.

But let’s break this down further. If we were to construct a band-generator from whatever’s left of Brian Wilson’s bathtub, that spinning 9-necked guitar from Cheap Trick, and the foreclosed ruins of Lou Perlman’s boy dungeon, the device, no matter how complex on the inside, would only need to have two inputs: “adjective” and “noun,” or, as it states in the manual, “idea” and “thing.” Wonderful! We have just given birth to Whitesnake, Darkthrone, Big Black, Lightning Bolt, and, why not, Cheap Trick. This construct is useful not just because you can make new bands forever, but because the layman can decipher what he’s about to listen to before he even hits play. Whitesnake sounds like a huge penis, Darkthrone sounds like a malevolent, slightly smaller penis, and Big Black sounds like Steve Albini’s idea of Parliament were Parliament to turn into a…oh wait, never mind. The idea begets the name begets the band. Click, spit, another gem off the assembly line.

But what are the limits of this magical machine? What function would fry the system? Repetition of terms? No, there’s Duran Duran, the adjective of Duran modifying the noun Duran for extra clarity. Nonsense? Nope, Kajagoogoo comes out looking pretty sleek. These are all New Wave bands, of course, and should be expected to communicate sympathetically with the motherboard.

Here’s where the story starts, though: the other day I was tinkering with the BG (I have one in my basement), and, completely by accident, came across the killer combo: “Dino” , “Walrus” . Dinowalrus. Sparks flew everywhere. There was an explosion inside the casing. The steel bubble split open like the pod from Bodysnatchers or Cocoon. Before me were three dudes: One was tall and lanky and looked like an anorexic Slash. One was Asian, slightly shorter. The last one, holding drum sticks, resembled a twelve-year old. He had braces for Christsakes! We got to talking. I went to one of their gigs. They were nice guys.

Troubleshooting the breakdown a few days later, I came across the error log, lines and lines of perfect code and then, right above the bit where the whole system went to shit, a simple message: “What is the idea?”

Even as we approach the inevitable Singularity, Machines still aren’t really that good at abstract thinking. To the CPU, an idea is really just an “idea” : “Hate” , “War” , “Love” , “Peace” . Cool ideas. The problem with Dinowalrus is that instead of having an “idea” , they inverted the generator’s fundamental equation. Dinowalrus, like the fucked-up primordial soup-beast they name drop, generated their own idea.

I’ll be honest. I don’t really know what that idea is. But who does when it comes to a paradigm shift like this? It’s like asking someone circa year 0 what the idea of God is. He’d be like: “What? God is God, man.” I, who, some 2009 years later, can rattle off the Cliff Notes of contemporary atheism without hesitation, am forced in this case to harken back to that old-time ancestor: “Dinowalrus is Dinowalrus, man.”

So what do they sound like: a cyborg thrash collective doing body percussion; what would happen if they jacked a Gibson SG into the Matrix instead of Neo’s skull; field recordings from a future where we all live inside computers.

The Mae Shi remix of “Nuke Duke ‘Em” off Dinowalrus’s forthcoming record % runs the gamut from eponymous video game questing to white club spazz dancing, nixing the band’s ambient tendencies in favor of heavily textured breakbeats and clipped synths over an, um HEALTH-y guitar rumble and breathy, humanoid vox. What’s amazing here is how malleable the source material seems to be. Dinowalrus’s music, already existing in a state of near-infinite recombination and remix, is rendered by the Mae Shi not as greater or less than, but precisely, literally as the sum of its parts. This is the real Shi-house, not a banger for the club circuit, but banged up circuits for clubgoing computers.

B-side, the older track “Dole,” resembles some kind of self-conscious Italo-disco forgery distilled with an infusion of Pac-man cherries and imported axle grease from 1980s Detroit. Jackin’ beats, arpeggiator runs, a vocal take that sounds like it was recorded in the Cave of Montesinos: its like workout music for sedentary MMORPG addicts, the starter kit for “8 Minute Abs(straction).” This stuff makes you stronger, for sure, reinforcing neural pathways with titanium and figuring out algorithms for life after death.

You don’t put ideas like these into the band generator. Version 2.0, already rebuilding itself downstairs as I write this, can sentiently remix itself while my weak biological body falls asleep onto the keyboard. Dinowalrus is the sound of that construction project, a new kind of fractal culture-jamming where all material is fair game, where all evolution is instantaneous.