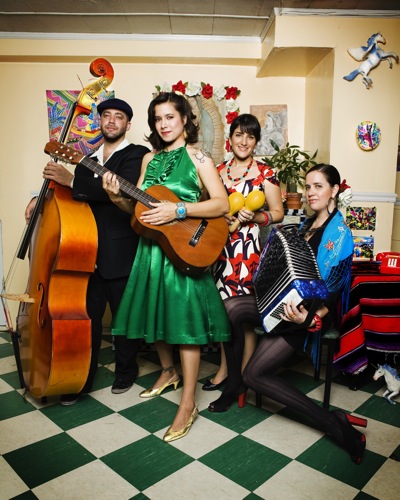 Pistolera, like many of the bands featured on The Ampeater Review, hails from Brooklyn but their heart lies over the border. And no, I’m not talking about Queens. The quartet, which features Sandra Velasquez (vocals, guitar), Ani Cordero (drums), Inca B. Satz (bass), and Maria Elena (accordion), plays an energetic blend of ranchera, cumbia, and rock. Velasquez’s percussive guitar and Satz’s reggae-tinged bass grooves lines would be standard enough fare in Brooklyn’s dives, but Elena’s peppy accordion-driven melodies and Cordero’s distinctly Latin percussion, not to mention lyrics entirely in Spanish, evoke the small-town cantina mexicana.

The first time I saw Pistolera perform was at AS220 in Providence, RI in the winter of 2006, before a small but enthusiastic crowd. The band was less than a year old and didn’t yet have an album under their belt. Nevertheless, they were overflowing with energy and managed to bring a crowd of skeptical hipsters to their feet. My knowledge of Spanish, still far from perfect, was then rudimentary at best, so I wasn’t paying much attention to the lyrics. I was just having a blast. The groove was unstoppable. During extended breakdowns the whole band would take shifts on cowbell or clapping out complex clave rhythms. I picked up a copy of their self titled EP and have been tracking them ever since.

Over the past few years, Pistolera has come along way. The world is finally beginning to take note of this underappreciated band. In addition to gigging across the United States, they recently performed at the Montreal Jazz Festival and have toured in Europe and Mexico. They’ve shared the stage with many prolific acts including Lila Downs, Los Lobos, and Vieux Farka Touré. I suppose that Lila Downs and Los Lobos are logical enough pairings since both play music not unlike Pistolera’s, albeit Downs with a more prominent jazz influence and Los Lobos leaning more toward rock. But what about Malian singer and guitarist Touré? Frankly, I think Pistolera could be a hit in almost any niche. Luckily they don’t try to pigeonhole themselves.

Pistolera has recently recorded two full length LPs. Their debut Siempre Hay Salida (There’s Always a Way Out) was released in 2006 and followed up by En Este Camino (On This Road) in 2008. Both albums were produced by Grammy award-winning producer Charlie Dos Santos and sound top notch, with additional instrumentation pushing the band’s already festive sound to new levels.

As I mentioned, the first time I heard Pistolera I didn’t catch the lyrics but since then I’ve given them a lot of thought. The name Pistolera is Spanish for female gunslinger and Sanrda Velasquez, who writes most of the band’s material, is a true pistolera. Don’t be fooled by the peppy rhythms and joyous melodies… she means business. The music is deceptively lighthearted and the lyrics pack a strong political punch. Her socially conscious songs address issues such as immigrants’ rights, war, racism, feminism, and life on the border.

These aren’t songs of rebellion in a vague or disjointed sense. These are struggles that the Mexican-American women of Pistolera have a strong personal connection to. And so, we return to the epigraph, “mujer terrorista, feminista, mexicana, americana, condenada, peligrosa… pistolera!” which is incidentally the final line of A-side “Policá­a” (Police). The words lose a lot of their elegance in English, but here’s a rough translation: “terrorist woman, feminist, Mexican, American, condemned, dangerous, PISTOLERA.” Few phrases could better describe Velasquez. Edgy and autobiographical, in “Policá­a” she attacks the xenophobic and racist police who’ve unfairly targeted her.

They treat me like a criminal, like a traitor. Terrorist woman, dangerous pistolera. Mr. Policie officer there is an explanation. It is not what you think, it’s that I am a musician. The bullets that you found inside my suitcase will not be used to shoot anyone. Mr Police officer I am telling you the truth. I am dangerous, but not with guns.

“Policá­a” has become somewhat of an anthem for the band. Velasquez explains, ”[it] is a crowd favorite at shows. It’s why we decided to make it our first music video for En Este Camino” (see the video here).

Like the lyrics, the video chronicles a hostile encounter between Pistolera and the police. The band shows up to a gig but a security guard (who looks suspiciously like a Federal Agent) refuses to let them through the door. The scene could be viewed as an extended metaphor, the band turned away at the door like immigrants turned away at the border. In typical Pistolera fashion, while the lyrics are provocative, the music is free and happy. A strong ranchero rhythm and persistent cowbell keep the pulse going. The music video captures this contrast well. Spliced with shots of the band being stopped by guards are shots of them on stage inside the club, playing their hearts out before a dancing crowd. In this case, there’s a happy ending. The guard is pulled inside the club and as his sunglasses and tie are stripped away, he begins to feel the rhythm and dances along. If only it were that simple.

B-side “Un Momento” (One Moment) is not a typical Pistolera song. In fact, Velasquez explains that she included it on this digital 7-inch precisely because it’s so different from most of Pistolera’s material. “A true B-side, it shows another side of the band.” The recording is heavily orchestrated. A tuba grunts along with the bass line and a clarinet noodles playfully between vocal lines. Throw in accented downbeats with snare hits on the two and four, and you’ve got something reminiscent of Louis Armstrong or Bix Beiderbecke. But the minor tonality and Elena’s somber accordion melody completely recontextualize whatever’s been evoked. Both peppy and mournful, if “Un Momento” is one thing, it’s determined. It’s as if the band is telling us to march on in spite of whatever hardships lie in this path, en este camino.

The lyrics deal with loss although exactly who or what is lost is slightly ambiguous. A lover, friend, a mentor, a parent, a homeland, a part of herself…they’re cryptic and poetic and beautiful.

“You always told me that you would have to go one day. I didn’t want to believe you, even though you had never lied before.”

So what’s up next for Pistolera? Currently they’re taking some time off from touring to work on not one but two albums, to be released in 2010. One will be a normal Pistolera album, the other will be a kid’s album. WAIT, backup…. a kids’ album? On their website the band explains, “the three women of Pistolera are all mothers, and this project could not have been born without the knowledge and experience that comes with being a parent. We are really excited and look forward to giving our younger audiences something they can easily sing along to in English and Spanish!” There are plenty of parents who play Mozart for their children, but for those of us who want to raise bilingual kids, perhaps this is a bit more pragmatic. All I ask is that nobody gives me a hard time if I want to sing along at 23.