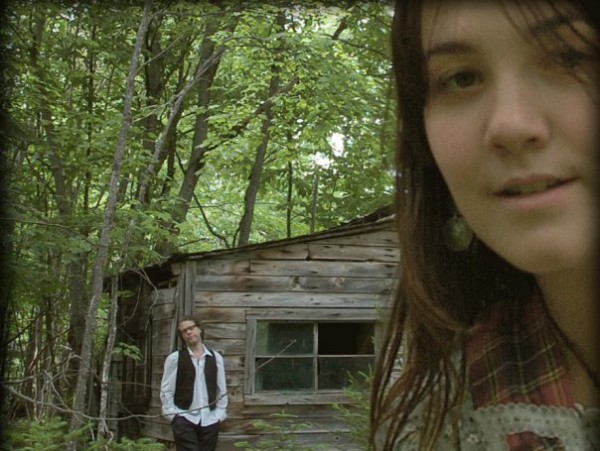 I love the internet. It’s great to live in an age where two ordinary friends in a small town in Upstate New York can self produce an extraordinary EP and rise to indie fame in a matter of months. Or perhaps multi-instrumentalist Chris Clarke and vocalist Meadow Eliz were not so ordinary to begin with. Nevertheless, the pair have done pretty well for themselves considering that they met little more than a year ago. Here’s a short chronology of their efforts: October 2008: Eliz and Clarke meet at bowling alley in Saranac Lake, Population 5041. Shortly afterwards, they cross paths at the deli in which Eliz is working. From these humble beginnings a strong friendship is formed.

Fall 2008: Eliz and Clarke work together composing music for a student theatre production at St. Lawrence University. They enjoy collaborating so much that they decide to continue making music after the production ends.

Winter 2009: Eliz and Clarke find relief from the snowy subzero climate of Saranac Lake in Clarke’s home studio. Armed with a Casio keyboard, a laptop, a hodge-podge of analog equipment, and a bit of instrumentation help from some friends, they record and produce an EP under the name Swimming in Speakers.

From there, it all happened virtually overnight. Eliz and Clarke quickly become “darlings of the internet.” They’ve been interviewed on a number of blogs and radio stations and their song “In Knowing” was aired on BBC 6 Music with an introduction by Tom Robinson.

Everybody loves a happy ending, but happy beginnings are nice too and Swimming in Speakers has had an unusually happy beginning. Sure they’ve gotten a few lucky breaks, but that’s not to say that their success is undeserved. On the contrary, I think they have potential to be huge. And with any luck, this feature in The Ampeater Review will catapult them into the upper echelons of stardom (or more likely, their success will help this modest website get a few more views). That said, I’m going to stop pontificating for a moment and give the music a chance to speak for itself.

A-side “In Knowing” is the first cut and obvious radio single off Swimming In Speakers EP. It has a strong grove and enough hooks to catch any listener. The recording is masterfully produced, with bubbling synths bouncing around in stereo and layers of vocals overdubbed in all the right places. Normally I’m a bit wary of any band that uses a Casio keyboard en lieu of a drummer, but in this case it’s the perfect fit.

However, if the catchy synth-pop instrumentals are what grabbed me on the first listen, its Eliz’s soft voice and off-kilter lyrics that have made a lasting impression and differentiate “In Knowing” from other infectious jams. The verses are meandering and verbose and don’t follow a clear rhyme scheme. One of my favorite lines:

“I complete this representation of a utopian love affair within which you perform.”

The chorus, in contrast, is a simple refrain. It’s easy to remember, but packed with ambiguity.

“In knowing how do you decide…“

Eliz’s delivery is completely relaxed. Although her voice is produced, it retains a distinctly natural quality. And yet, it never seems at odds with the glossy instrumentals. The two interact playfully, like the best of friend.

Like Eliz and Clarke. Perhaps that’s a good way to think about Swimming in Speakers… It’s the kind of music that only friends could make. Eliz and Clarke have remarkable chemistry. In an interview for American Indie, Clarke explained their songwriting process.

“Usually, I will write a phrase or riff or beat or all three - Meadow will listen to all the ideas I have come up with over a couple of days - if something sparks her interest, we’ll lay down some vocals. If we like what we have, Meadow will hunt for some lyrics, and we’ll refine the melody.”

Or, for a better glimpse into their creative process, check out this lyric sheet. Clarke typed the lyrics, and Eliz is responsible for the corrections, doodles and all. 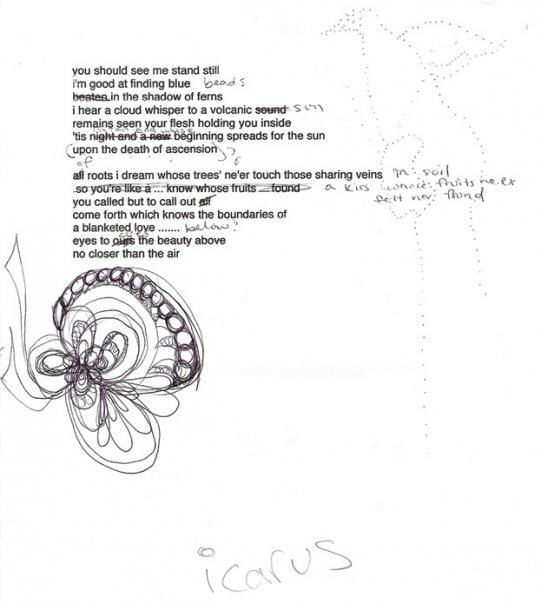 Both Eliz and Clarke are self taught musicians. In fact, Eliz explains that as a child she was prohibited from taking voice lessons because her mom “didn’t want someone tinkering with my instrument.” An unusual decision, but definitely the right one. Uncorrupted by theory, the pair embrace their natural understanding of music.

Although Swimming in Speakers began as a studio project, fueled by their success, Clarke and Eliz have recruited a number of friends to help flush out their live set. The current lineup includes Kyle Murray on drums and percussion, Christina Grant on cello, and Colin Dehond on additional instrumentation. Live, they have an incredibly organic feel and employ an amazing array of strings and percussion, as well as instrumentation you couldn’t imagine (e.g. didgeridoo, mouth harp, etc). Since the transformation of Swimming in Speakers from a studio project into a performing band, the group has moved in a slightly new direction, putting more focus on acoustic instruments.

B-side “Nevergreen” is a stripped down acoustic ditty. The arrangement is remarkably sparse; the only instruments are a tinny lightly-picked acoustic guitar, and a sweet cello. On the second verse, reversed sounds bounce around in stereo, but only peripherally, as an extra color rather than a focal point. The nuances of Eliz’s voice are more readily apparent when not competing for attention with heavy synths. While the lyrics of “Nevergreen” are relatively simple, but she does a lot with her phrasing and articulation.

“Oh wait, once more, will you come back to me…“

She plays with that “me” for three times the length of the phrase, bending in and out of a soft falsetto.

As Swimming in Speakers rounds their one year anniversary, it will be interesting to see how they evolve. How will the calm sounds of Saranac Lake mesh with the bustle of NYC? Eagerly awaiting a full length album.