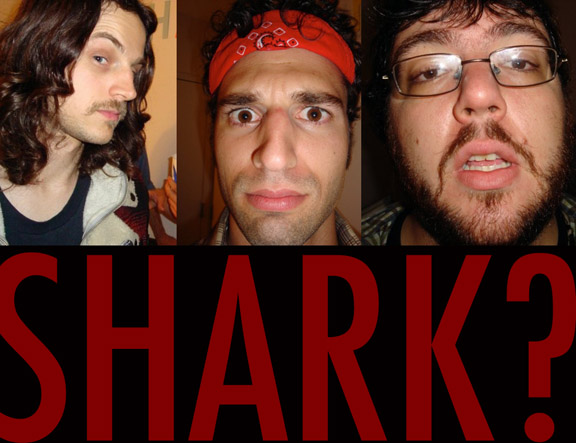 The biggest question asked by the music of Shark? is, well, Shark? No, seriously, this is pretty straightforward business, albeit masterfully made, with an expansive, almost theoretical understanding of what “indie rock” could mean in an era when that term has become practically meaningless. So, regardless of how, I don’t know, not-new-in terms of synth wobbles, cut-up drums, faux-afro flavor, fu*k it, even compression-Shark? sound, that reactionary aesthetic, here appropriated with live instruments the way other bands mine Max MSP, is very interesting indeed.

Why? Because Shark? (from Brooklyn) proves that there is such a thing as an “indie” sound that has nothing to do with actual “indie-pendence” , that the accidental aesthetic of basement productions of the 80s and 90s has become dislocated from the conditions of their production. What we have here is pure simulacrum, the sign (rock) dissociated from its signified (filth, 4-Tracks, etc.) to make way for an “indie rock” that is nothing but sound signifying itself.

Snore. But really, it’s worth noting how this pattern has been unfolding across the pop-music consciousness of America since, let’s say, The Strokes (and by the Strokes, I don’t specifically mean the Strokes, but that whole idea of the Strokes). Not that “indie” is a new term. I remember that shit on my amazon.com wishlist when I was 8 and not knowing what it meant. Still, “indie” , at some point, must have meant “independent” , as in, not “independent-y sounding music” , but independence from major labels, playing nasty, hepatitis-C-infected living rooms, breaking strings and selling your shoes for new ones, the van blowing a tire in Topeka, and a bunch of other stuff I could make up. “Indie” wasn’t a way to play, it was an economic situation that necessitated a way of playing. Do I sound like an old dude? I’m not complaining. It’s just I have to believe that “indie” was a real thing before it was a genre, just like there was an “industrial revolution” before there was industrial music.

But back to Shark?. I love this band. Their record sounds great! They have incredible songs, great craft, a thick sound that I’d be psyched to see live. It sounds like some undiscovered 1976 gem of a single dug up in the way back of the last surviving CD store in Minneapolis’s going-out-of business sale. Kind of. Or it could be from Sweden. That’s the whole point. Wherever these guys are from, the music is place-less, scene-less, history-less while at the same time evoking perfectly someplace, some scene, some fraught and cool history.

“I’m an Animal,” has my new favorite comeback. In response to the title, the singer, on the second verse, rebuts, in a dead-eyed, crackly voice, “You’re a mineral.” Brilliant! Let’s talk about this. The song kicks off with some shambolic hi-hats, then a big organ swell, then some staccato guitars, meaty-bass, echo-y, tinny vocals. It’s pitch-perfect in its imperfections, like a cheese-filled with delicious fungus and covered in holes. Yada-yada, the tune continues. Then, out of left-field comes this warbly, crazy-flute synth, somewhere between “My Heart Will Go On” and MGMT (wait, is there “somewhere between” those two things?). It’s a killer riff. But what is it? The singer knows. If verse one was the animal, verse two is the mineral.

The second track “Colder Arabella” , a slightly-renamed cover, apparently, of another Brooklyn band called Dinosaur Feathers’s tune called “Cold Arabella,” drives the disconnect home. While the titling is amusing, it’s also a seemingly out-of-place nod to remix culture: Dinosaur Feathers’s is cold, but this shit is colder! I’d believe it. The track, dry, fuzzed-out, deadpan, a little out of tune, is so anonymous it could have been produced autonomously from a sentient version of the 1984 SST catalog. It’s chilly, not like steel girders in February, but like circuits in cold storage.

What we have in Shark? is a question without an answer, where the unanswerability of the question (where, when, who) makes the band unique and specific. Shark? could only exist now, whenever now happens to be.